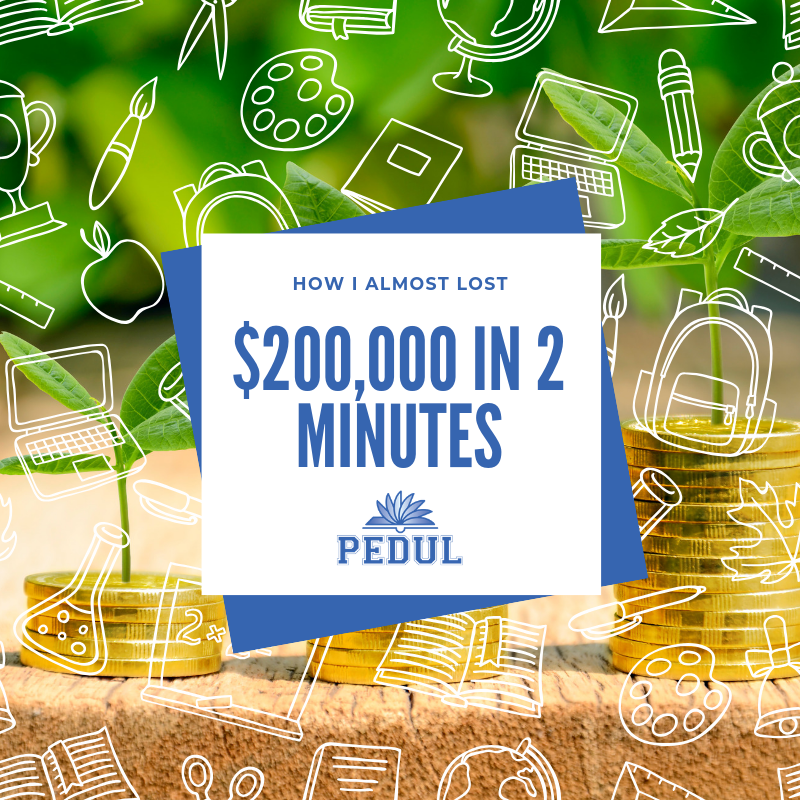 I'm a huge fan of bootstrapping and being a financially resourceful founder, but I'm also convinced that Murphy's Law is far more applicable in the the startup world than any other adage: anything that can go wrong will go wrong. When my job, day in and day out, is to figure out how to stretch a dollar, while also making a penny turn into fifty cents along the way, I can get a bit maniacal about bargain-hunting.

In October 2017, I received an email from Pipeline Angels, a network of new and seasoned women investors dedicated to creating capital for women and non-binary femme social entrepreneurs. I foolishly slept on a suggestion from one of their members encouraging me to apply to their NYC pitch summit, so I had to submit an application to their Portland and Seattle pitch summit. PeduL was selected to pitch in Seattle. At the time, our runway was thin and we could barely scrape together the funds needed to purchase the flight. I'm the queen of finding cheap flights, and not even I could finesse a $115 round trip ticket, as I usually do when visiting my best friend on the west coast. So I made an impulsive decision and trusted a referral.

Why did I look for a deal if it meant I was risking reliability? Because I'm a startup founder, freshly out of college with deferred loan debt, who already invested over $19k of my own savings into this business, while also paying rent in the most expensive state in the country. That's why. With the flights to Seattle ranging between $399-$430—with long layovers—I couldn't risk accruing anymore debt on our company card than absolutely necessary. Needless to say, I got desperate. I reached out to one of my good friends from Denver who said she knew a guy who could get round trip tickets anywhere in the U.S. for $100 per one way. Little did I know at the time, it could have cost me a $200,000 investment.

I'll use the alias, "Peter," to refer to the most unreliable "travel rep" I've ever encountered. I called Peter about two weeks after finding out that I'd have to fly to Seattle in November to pitch. He agreed to "give me a deal," but it came with a sketchy stipulation: he had to purchase them one day before my flight. When he told me it'd be a guaranteed $100 for a one way from NYC, of course I became overzealous. I immediately sent him $425. That would cover the round trip cost of me and my cofounder's ticket, and I threw in an extra $25 for his time and perceived loyalty.

Another two weeks passed by, and just one day before I was supposed to be in Seattle, I hit up Peter so that he could purchase my flight. I am not kidding when I say he ghosted. It's like he completely fell off the face of the earth. I foolishly trusted this man because I trusted our mutual friend and now I would be forced to pay over $800 for a round trip flight to Seattle departing in just 24 hours. PeduL didn't have that kind of budget at that time, so I continued to blow up his phone. At 3:00AM/EST, just 19 hours before my flight, he responded.

"Your flight at 10:30 PM/EST to Seattle with a layover in Denver is still available," he said.

Remember, that only costed me $100. Just seven hours before my flight, I had to run some last minute errands prior to my departure. I arrived to the airport without a boarding pass in-hand. I started getting nervous, especially because I had just texted Peter three times earlier that day confirming the status of my boarding pass. Good thing I arrived to the airport 2 hours before my flight because I finally got a hold of him.

"I didn't buy your ticket yet," Peter says. Keep in mind, check-in closes 1 hour before your flight on most airlines, and they close the gate to the plane 10 minutes prior to departure. Frantically, I urged him to purchase my ticket. I implored him to do the same for Chisa. As I'm rushing Chisa via text to get to the airport, Peter texts me the last thing I wanted to see.

"I got your ticket, but it was the last seat available," he said.

Was he joking? This had to have been a game. I was waiting for the hidden cameras to come out and Ashton Kutcher to run towards me screaming "You just got PUNK'D." Although I already knew I'd have to pitch alone because of the demographic and guidelines of the pitch summit, Chisa is not only my cofounder, he's my greatest cheerleader. I wanted him to be in the room when we secured that investment opportunity, and my obsession with a bargain stripped that away, and it almost jeopardized the opportunity all together. Now I was on my own.

Little did I know—but I should have expected—Peter completely disappeared when it was time for me to return home. He ran off with my money and my dignity. Good thing I sent him the payment via PayPal for business, or I would have lost $425 . This entire experience made me angrier and hungrier than ever.

It motivated me to absolutely nail the pitch. If I didn't receive a callback, I knew I was at minimum the "crowd favorite." The anticipation came to an end when I received a congratulatory email the next day notifying me that I was one of three presenters selected to move forward to due diligence. However, the startup journey is never predictable. Pipeline Angels wound up taking months to return our due diligence emails and they never followed through with the investment. At that stage of our company, we weren’t interested in chasing after anyone who didn’t consider us a priority, so the deal ultimately fell through.

But the point of the matter is, I was foolish enough to put all of our eggs in one basket. It was enticing to search for the best bargains because we are lean startup founders trying our best to conserve our burn. Yet, along this journey, it’s our responsibility to be calculative and identify which “deals” are worth sacrificing and which ones are worth pursuing. That’s particularly true for sales deals, investment deals and cost-efficient deals. Sometimes choosing the "deals" that can ultimately jeopardize opportunities meant to help you grow, will hurt you and your vision, in the long-run. Although that particular investment opportunity didn’t pan out for us, it was a much-needed lesson about choosing our battles, budgeting and being intentional about the financial stamina and health of our business. This experience forced us to become intentional about strategizing our seed round and how to properly manage our runway. In many cases, I wouldn't change anything about this wild startup roller coaster. It's taught me how important it is to become a leader who finds the perfect balance between being reactive, proactive, iterative and adaptive.