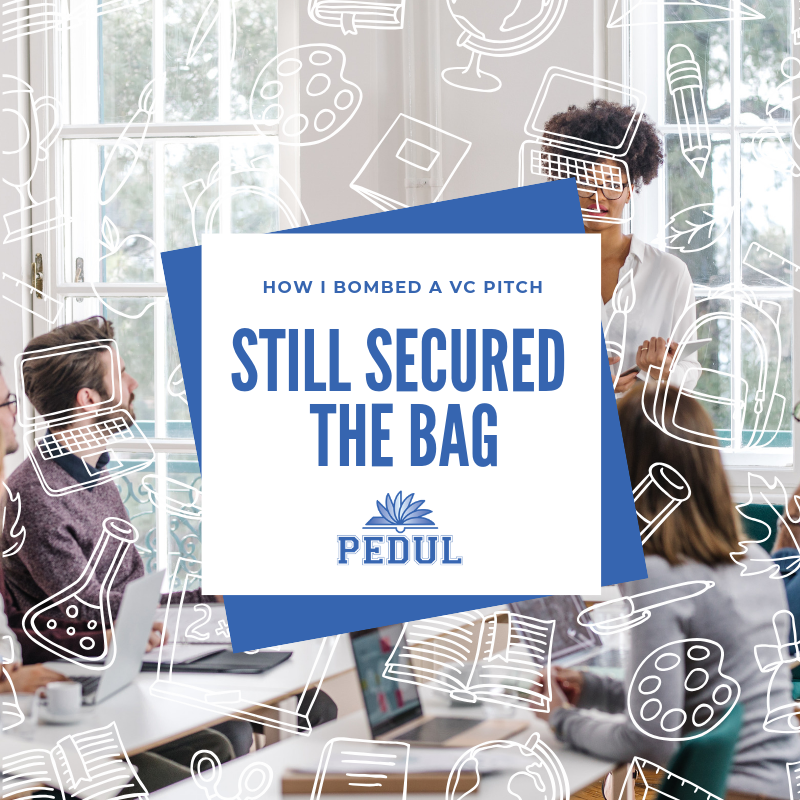 Friends and family rounds are constantly hailed as one of the "easiest” methods of raising capital. This narrative permeates business school lecture halls, and it's overly glamorized in today's startup culture. What people fail to do is call it out for exactly what it is: inherently privileged.

Let me be clear, I grew up playing golf. I’ve never been to public school. I acknowledge my class privilege, but it’s still a reality that most of my friends are pretty broke and a majority of my family is working class. If my parents didn't have the resources to fully cover my college tuition, why should I expect them to fund my "pipe dream?" This is a reality for many founders—especially those of color. Considering PeduL’s traction thus far, it's easy to submit to the fairly common "founder mindset" that my startup will be successful. However, it's much easier for my family to conduct a cost-benefit analysis when its their checking accounts on the line, as I’m sure many other founders from marginalized communities can empathize with.

Friends and family rounds suggest that people should, can and do have access to a network with a multiplicity of financial options. It’s almost ironic that this is the root concern my co-founder and I have with the model of crowdfunding. It’s the reason why we started PeduL in the first place. I do think—in some ways—that we’re fortunate to not have access to a well-endowed network. This position gives us a unique opportunity to get creative about how we raise capital, especially by tapping into high-net-worth networks like venture capital and angel investment. But we know this isn’t an easy feat.

According to a CB Insights' study from 2010 on venture capital investments, a mere 1 percent of VC-funded startup founders are black. An even more demoralizing statistic? While female founders overall receive 2.7 percent of all venture funding relative to their male counterparts, black female founders receive 0.2 percent. Now imagine me, falling into both marginalized categories. Daunting is an understatement. One of the top reasons that early-stage startups fail is because of a lack of sufficient capital, but a lack of VC funding also forces startups to think lean. However, one can only be lean—and buy/flip items on eBay like we've been doing— for so long until the capital requirements become too great to bear for the sustainability of the business. PeduL was fortunate enough to join the community of venture-backed companies with minority founders. However, we were extremely lucky, and it wasn't enough to keep the lights on. To be honest, we work in the dark—often.

We worked tirelessly between January and April 2016 out of our dorm rooms. Our founding team members met every Sunday for 12-16 hours working on business development. In late April, we were featured in an online publication called Startup Panel. The Rutgers University sophomore, Patryk Fusiarz, who wrote the feature on us, was working on a startup that helps connect student founders with startup ecosystems, accelerators and capital—now known as Ramenworks. Through genuine relationship-building and word-of-mouth, we became their beta. Their minimum viable product. Their proof of concept. We had always been told that rejection in the venture world was far too common. Although we were prepared to enter any VC pitch with what we thought to be our A-game, we were mentally prepared for bad news. After all, we only had a subscription page to our name.

Nevertheless, Fusiarz called us one day to inform us that he set up a meeting with an international telecommunications company called IDT, headquartered right down the street from Rutgers-Newark. We were shocked that they were even interested in sitting down with us. Again…we only had a subscription page. Although most pre-seed stage valuations are completely arbitrary, it was safe to say that although our idea may be worth a million bucks, our stock was realistically worth nothing. Beyond that, this was a multi-billion dollar corporation we were pitching to. This was a company known in its space for winning. We had to come correct. Not only have they launched several ventures around the world, from Net2Phone, the Internet telephone service, to a talk-radio network and a financial services business, they’ve also dabbled in the entertainment industry, producing computer-animated films and horror flicks. Needless to say, they have no concept of “staying in their own lane.” And they’re really good at crushing it in these lanes. Now they were exploring the world of venture capital, with the wherewithal to do what most VCs do to early-stage founders—reject us.

We thought that we completely bombed the opportunity. Murphy’s Law is a notorious friend of the NJ train system, so of course we showed up to our meeting over an hour late. With our palms sweating and our hearts racing, my two cofounders and I walked into a room with six people, one of whom was the CEO of IDT. No pressure.

It took us about 20 hours, the night before the meeting, to put together a horrible 21-page, 25 minute pitch deck that may have only been saved by our ability to story-tell. We were journalism majors after all. It seemed far from irreproachable. However, the higher power I subscribe to must have been on our side that day. For a multitude of reasons, only one day after our pitch—which I repeat, was horrible compared to our current one—we received a callback from the VC’s office. They believed in us and our capability to make PeduL a success. They gave us a deal that valued our company at over a half-million dollars. It was a dream come true. This was an experience straight out of a movie. I would say an HBO show, but not even Pied Piper is this lucky on Silicon Valley.

I wouldn’t trade this experience for the world though. We had to learn to leverage what we’re best at: our sensibility to building relationships. Because we’ve been relentless in our pursuit of allies in the tech startup world, we were properly aligned with the opportunities that yielded the initial capital necessary to launch our minimum viable product.

What we lacked in our ability to pursue a traditional friends and family round, we gained in skills, opportunities and confidence to explore other funding options. We raised pre-seed venture capital as an early stage startup without a proof of concept or a functional MVP. It goes without saying that this is extremely uncommon. My point of the matter is, we didn’t succumb to the popular belief that friends and family rounds are common and “easy.” But we also didn’t feel defeated because of it. These types of rounds may be inherently privileged and elitist, but with the right resources, human capital—and prayer—funding your “pipe dream,” is possible. We did it, and so can you.