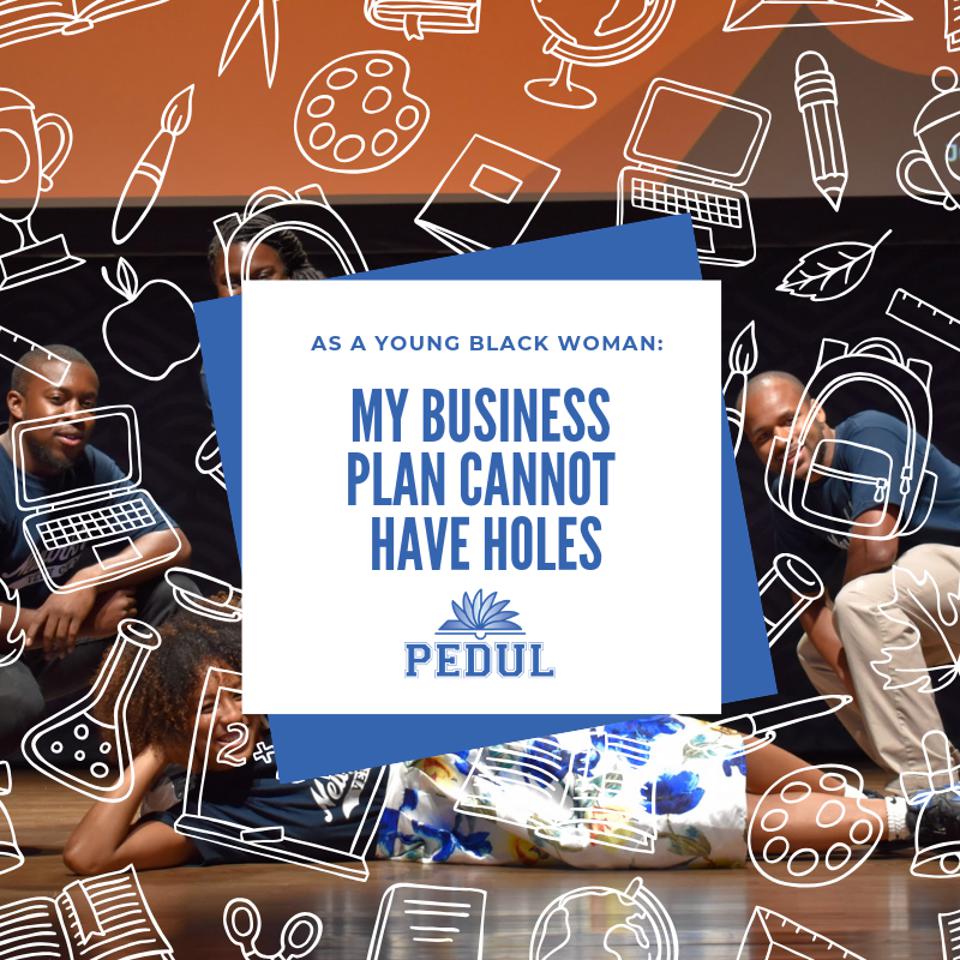 “He may not know his revenue model now, but with users comes opportunity.”

“For all we know, he could be the next Zuckerberg.”

“I’m concerned that he hasn’t solidified his go-to-market strategy, but that’s also what we’re here for, right?”

These are just a few of the comments echoed in over 23 pitch meetings I’ve observed. I shadowed a few prominent VCs in New York for a few days one summer in college, just to sit and listen. It was meant to prepare me for my own financing round with PeduL, but it only scared the crap out of me. Out of the 23 pitches, there was only one founder of color, and one woman founder. Of the six partners sitting in at each of those pitch meetings, there were no women nor people of color. They were 40+ white men. However, this isn’t an anomaly, nor is it my point. We all know, at this point, that this lack of diversity is reflective of the tech and startup ecosystem.

According to Pitchbook, less than 3% of investment professionals on VC firms’ teams are black and Latinx, and roughly 7% of partners at top VC firms are women and non-binary femme. It’s, in part, because of this lack of representation that black founders account for less than 1% of VC funding received, and women account for roughly 2%.

What statistic could possibly be worse? Although Black women are the most educated and entrepreneurial demographic in the U.S., we receive less than 0.5% of VC funding. Not 5%. Not 50%. 0.5%. It’s astonishing, disheartening and discouraging.

This sore reality isn’t just a reflection of the lack of diversity in principal positions at VC firms. It’s also indicative of the lack of access many people of color have to capital, and just how much more prepared we have to be when presented with such limited opportunities. If people who look like you aren’t in the room, your message could be easily lost. For example, I was listening to Reid Hoffman’s “Masters of Scale” podcast when he mentioned that Tristan Walker, founder of Bevel, a shaving system for men with curly hair, faced skepticism from investors that weren’t reflective of his widespread consumer base.

“I had a slide in there where I talk about Proactive as a good analogy of what we do," said Walker. "It’s like Gillette and Bevel being like the difference between Neutrogena and Proactive. It's a system that solves a very important issue, and this VC looked at me. And I will never forget this. He said, “Tristan, I’m not sure issues related to razor bump shaving irritation are as profound and big an issue for people as acne,” at which point I said, “I kind of understand what you're saying, but all you had to do was get on the phone with ten black men and eight of them would’ve said this is a permanent thing they have to deal with. And all you have do is get on the phone with ten white men and four of them would've said the same thing. You could've done it for women too, and you would've got the same ratios.”

I think Tristan makes such a critical point here. He was aware that his idea wasn’t faulty, baseless or even useless to the demographic he serves.

The VC’s opinion was demonstrative of his laziness, and his general hesitation or indisposition to acquire the context necessary to understand the prevalence of a problem that affects a demographic that he clearly couldn’t identify with.

Although the VC wasn’t part of the target demographic, it doesn’t and shouldn’t diminish that demographic’s experience or value in the marketplace. I faced the same kind of skepticism when participating in a university business plan competition two years ago.

My partner and I killed the pitch. We were confident that of the five companies pitching, we were going to at least place third. Little did we know, the fact that we didn’t place was due to the judges’ lack of understanding that although they may not personally use our platform, it doesn’t mean that the market for our service doesn’t exist. How is it that our business model had “holes?” There’s a reason why AirBnB, PayPal and YouTube were, and continue to be, such powerful and “disruptive” entities. They shifted culture and digitized a behavior that is as old as time itself. We already researched and validated the viability of our concept, yet we allowed these judges—who were representative of the majority of VC partners—to depreciate our business model surety.

It’s important for people of color, women and non-binary femme founders to internalize and trust that we know our market, our demographic, our experience, our research and our business more than any investor. We must hold onto this knowledge fiercely, especially throughout the arduous pitch process. We learned through our fundraising experience that people invest in people they know and like. If that’s going to continue to hold true in this ecosystem, then the most critical aspect of fundraising success is breaking into a very old, white male-dominated network and establishing credibility and trust. It’s a boys’ club, and with that comes many unconscious biases that we must collectively reevaluate, deconstruct and eliminate so that we can equally distribute opportunities to the next generation of changemakers and innovators.